Winning the Georgia State USPSA Single Stack Division title as a Class B competitor put action shooter Trent Eichler on the map. These days, when he’s not competing, the Team Taurus shooter enjoys meeting and training with expert shooters across the country.

What are your earliest memories of handling a firearm?

I first picked up a gun when I was just tall enough to stand it up. It was a .22 revolver that my father used while we were trapping.

The 2021 Bighorn Classic was the first match where KC shooters Eusebio, Trent Eichler and Jessie Harrison competed together as members of Team Taurus.

Tell us how you got started in competitive shooting?

I started competing around the age of 12 at the USPSA. A family friend, Jarrod, who goes by the name “Box”, originally sparked my interest in competitive shooting. At my family ranch, we did a ton of filming. He offered to train me and took me to my first game in Missouri. I’ve always been interested in competitive shooting and decided to give it a shot. From then on, I fell in love with the sport and practiced shooting whenever I had the chance. On April 19, 2021, I was grateful to officially join Team Taurus as a shooter. I’m very lucky to have Jessie Harrison and KC Eusebio as coaches, teammates and true friends.

What firearms and other equipment do you use for competition?

For competition I pull a 1911 Taurus that was custom built for Jessie Harrison. She gave me that gun and I’ve been shooting it ever since. It was built from a .45 frame and turned into 9mm. I shoot Hornady 9mm ammo.

Tell us about your shooting bag and what you carry in it besides your firearms?

For my shooting bag, I carry a GPS model, which is everything I need, whether I’m just training or taking part in a big competition. It also has plenty of room to hold all my snacks. Inside my bag are two gun bags containing my main gun, as well as a backup and six magazines. I also bring Leupold rifle scopes, Walkers X-TRM Series hearing protection, Hornady 9mm ammunition, Tipton nope string and gun cleaning kit, Wheeler Precision micro screwdriver set, old rag for wiping pistols and magazines, a shooting belt, applesauce, granola bars and juice. 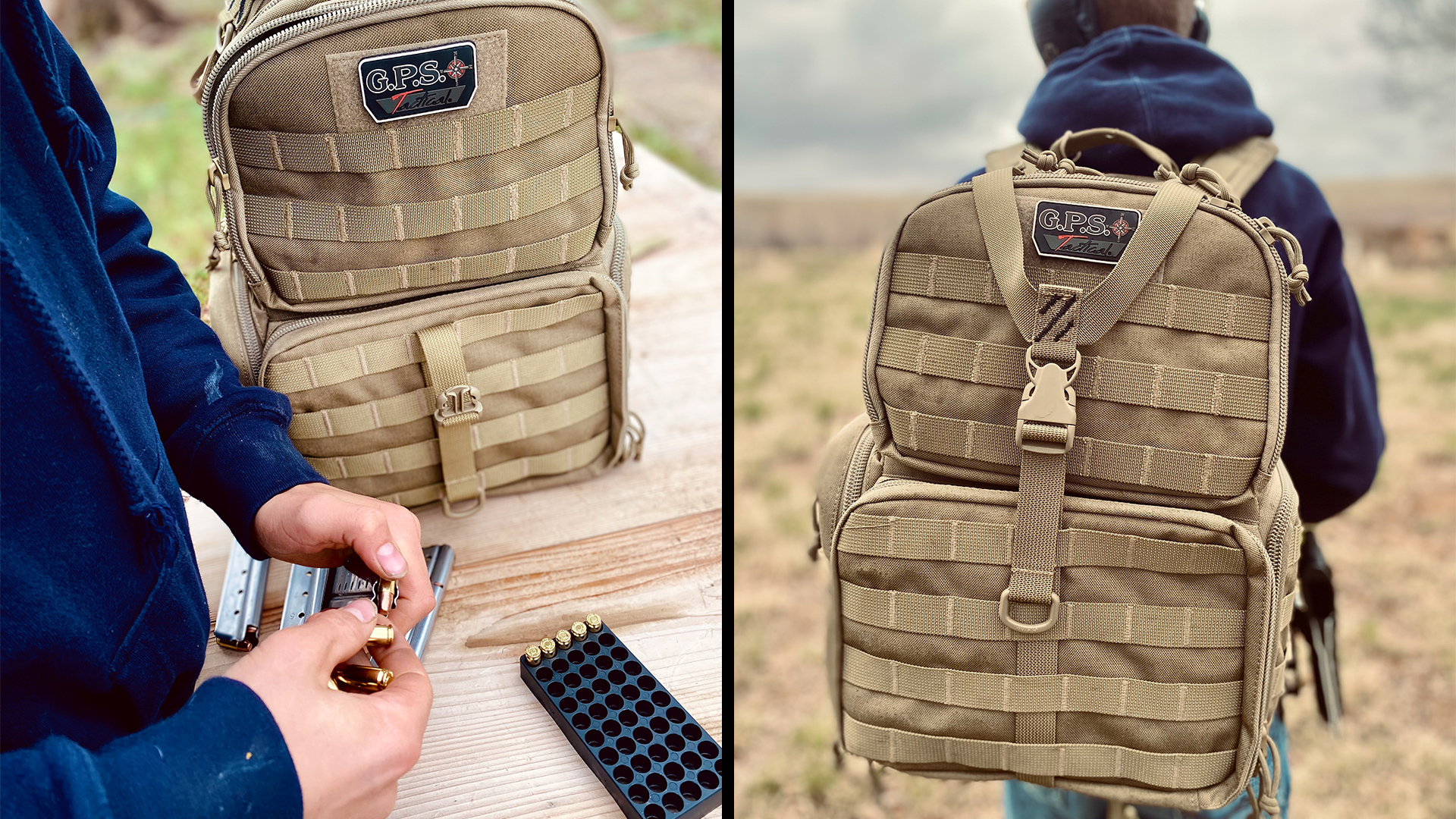 For a shooting bag, Trent Eichler uses a GPS, which contains his custom 1911 Taurus and other shooting gear, along with a variety of snacks.

What would you say to someone who wants to know more about your sport?

If you are interested in shooting sports, talk to someone who has experience. Most people are more than happy to take the time to impart their shooting knowledge.

Any tips for new shooters?

Take the time to practice, but be sure to practice safely and always have fun. Try to find a trainer and friends who also like sports. You will learn from the successes and failures of each. Never be discouraged throughout the process. Instead, use your mistakes as fuel to train harder and improve your technique.

When training for a bigger competition, I like to make sure my gun is on with my ammo. I go out to a shooting range with my BOG DeathGrip and shoot a mix of paper and Caldwell steel targets. The mixture between paper and steel helps me in my transitions during competitions. Also, be sure to thoroughly clean your gun before any competition to ensure it shoots smoothly and efficiently. This reduces the chance of malfunction during competition time.