Smallbore competition saw a huge leap in popularity after World War I, and manufacturers paid considerable attention to developing rifles of equivalent quality. Working with the NRA and competitive shooters on the design of a new rifle, Savage Arms introduced the “Model 19 NRA Match Rifle” in 1919.

That year, Team USA Dewar used the rifle at national games in Caldwell, NJ, according to then-writer FC Ness, after which the company made some improvements to the design. Savage made approximately 40,000 Model 19 NRA rifles (so stamped on the barrels) in 1937. Another 6,000 went to the War Department from 1943 to 1945. The Model 19 NRA stock was military configuration, with grooves for fingers in front and sling. swivels which made “the arm particularly adaptable to firing from the various standard positions incorporated in National Rifle Association matches”, according to a Savage Arms catalog from around 1925. 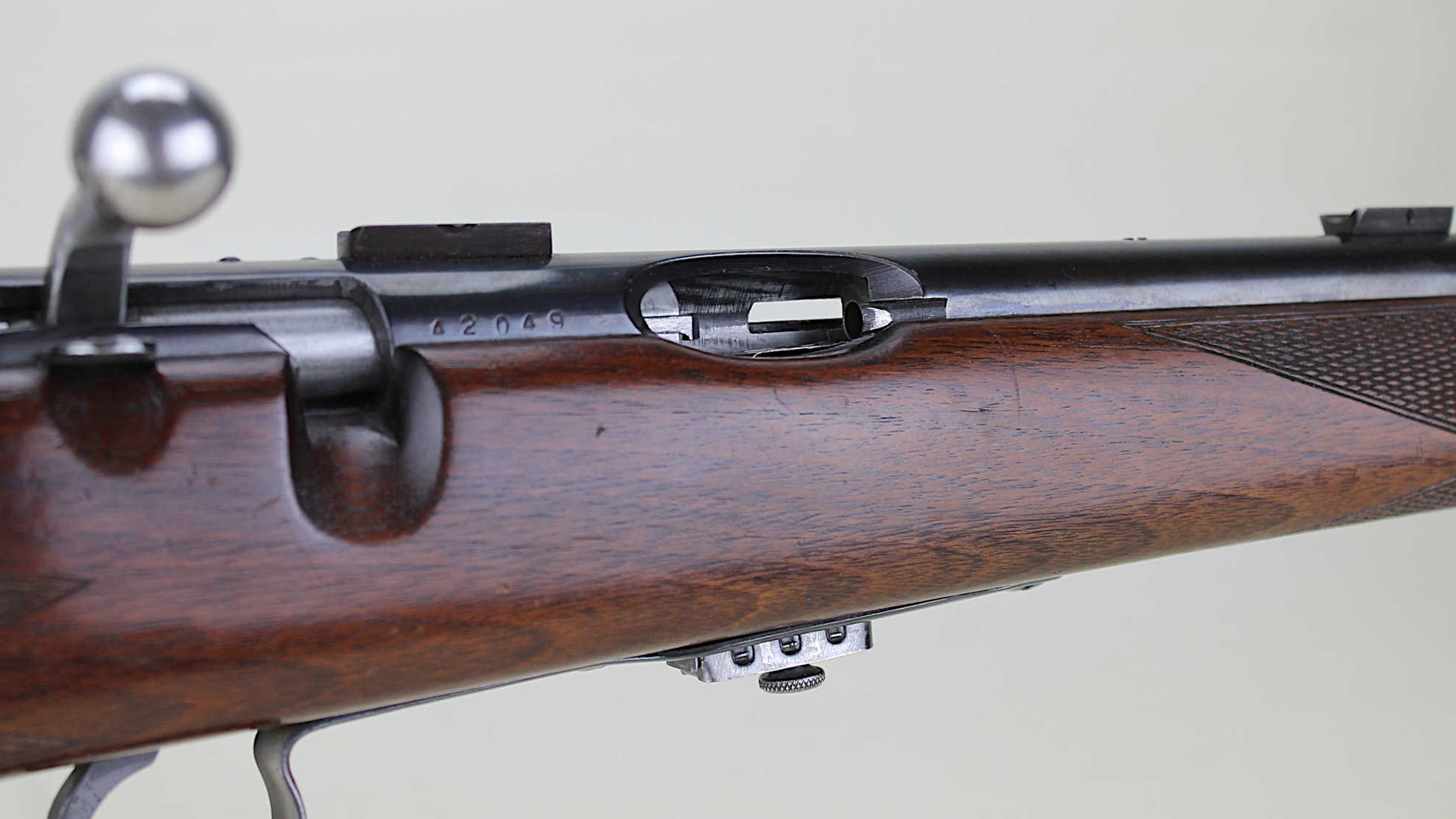 A view through the open oval port shows the cutout in the left wall of the action to accommodate the extractor.

The list price of the Model 19 NRA in 1925 was $21.75; additional magazines cost 25 cents each. Today, the blue book value for the rifle is around $200 in 90% condition. Savage Model 19 NRA rifles appearing at NRA online auctions in very good to excellent condition fetch between $375 and $450. In comparison, the Savage Model 23-A Sporter, which is simply the Model 19 NRA with hunting configuration stock and sights, commands less respect, selling for $60 to $279. 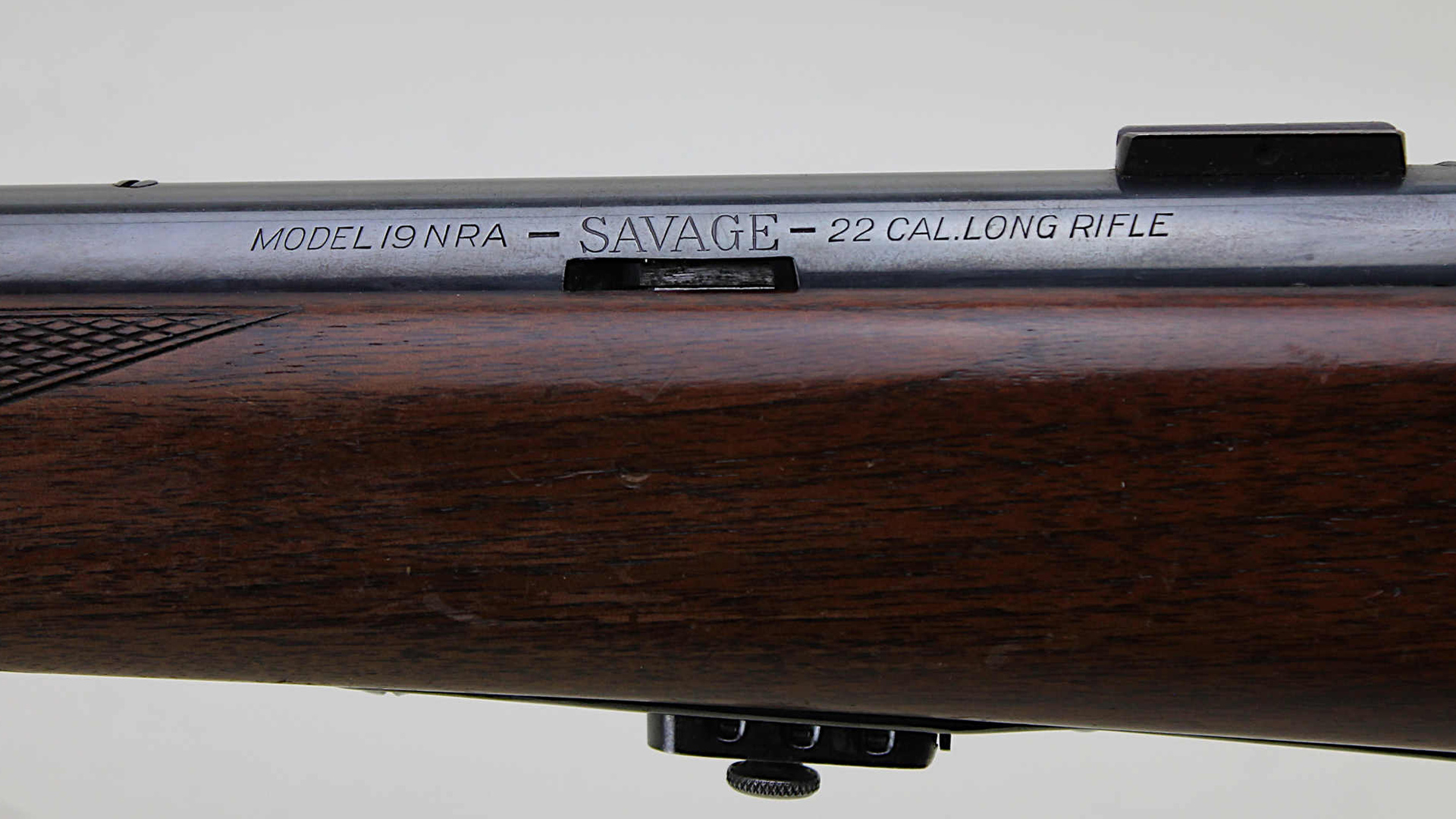 An NRA endorsement was a strong selling point for Savage’s Model 19 NRA Match Rifle. Again, the embossed cut of the extractor is visible below the word “SAVAGE”.

Which brings us here to the Model 19 NRA, an anomaly among the benchmarks in that the stock is neither the military-style stock nor Savage’s Model 23-A simple sport stock with Schnabel fore-end. Instead, the front is rounded; unlike the images of the factory builds, the pistol grip has a cap that appears to be gutta-percha or possibly bakelite, and the most obvious is the four-panel edged cut checkerboard. There are two quick disconnect swivels attached; the front pivot screws into a barrel band that pulls the barrel down into the stock, as found on the Mossberg Model 144US target rifle, and the butt plate features a “trap” for storage. I couldn’t find any reference to any of these features offered by Savage on the Model 19 NRA. They also do not match its .22 LR cousins, the Model 19L with Lyman receiver or 19M with 28-inch heavy barrel (both manufactured from 1933 to 1942). 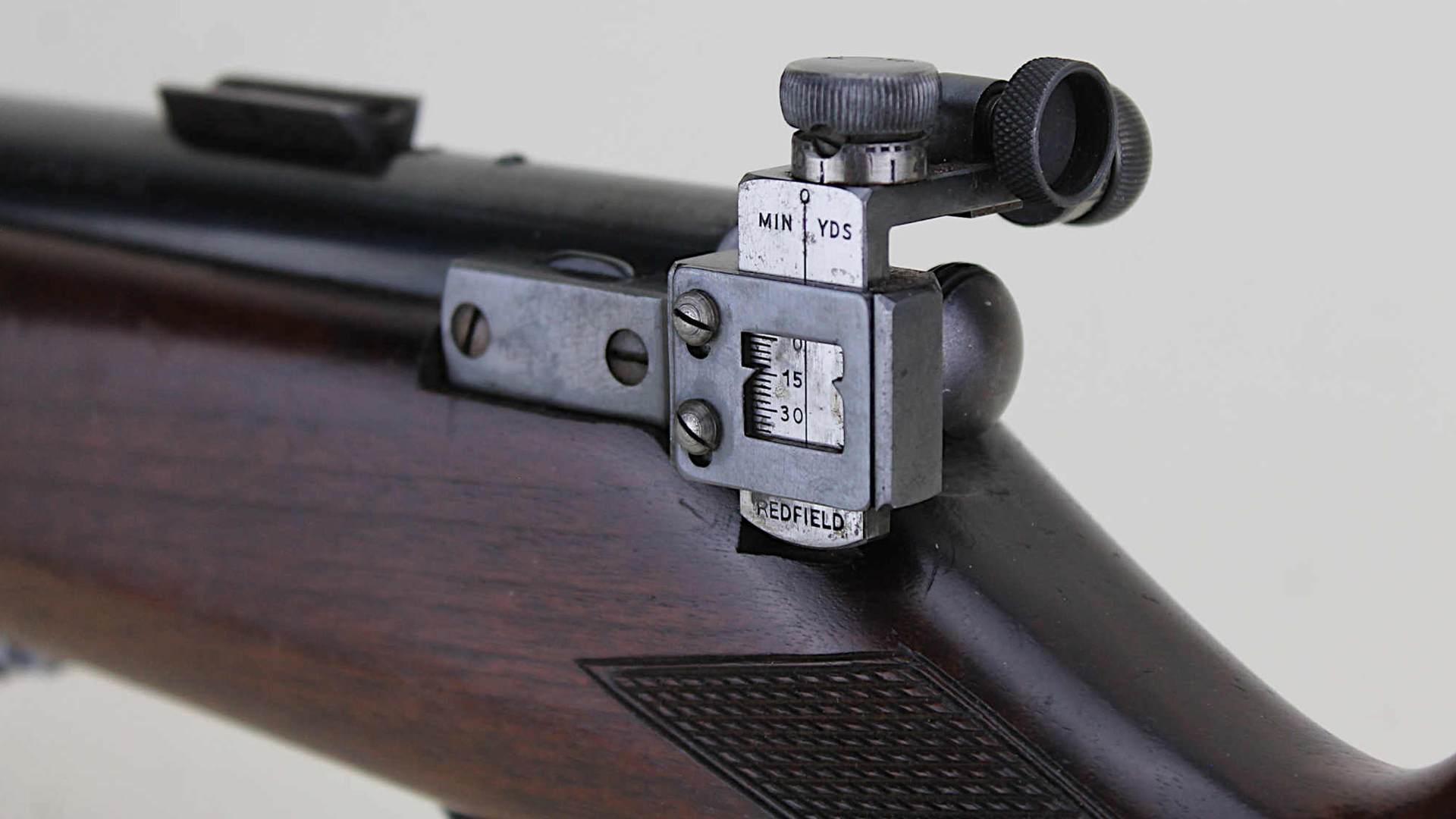 This rifle sports a Redfield target sight in place of the factory Savage front sight. It probably came from the factory so equipped.

This rifle is the second version of the Model 19 NRA, in a serial number range of approximately 25,000–45,000, which replaced the two-point firing pin with a single-point firing pin, among other minor changes. Further muddying the identification waters, Savage created another version of the same rifle, the Model 1933 (also known as the Model 19-33 or Model 33), but for a time retained the “model” barrel markings. 19 NRA”. The Model 1933 Match Rifle shortened the full length military stock to half stock length, extended the loading port on top of the action, and added a rear locking lug to the bolt. The rifle here is clearly not the 1933 model. In the absence of other credible information, the features not accounted for above may be custom features, making the rifle theoretically less desirable as a historical piece. 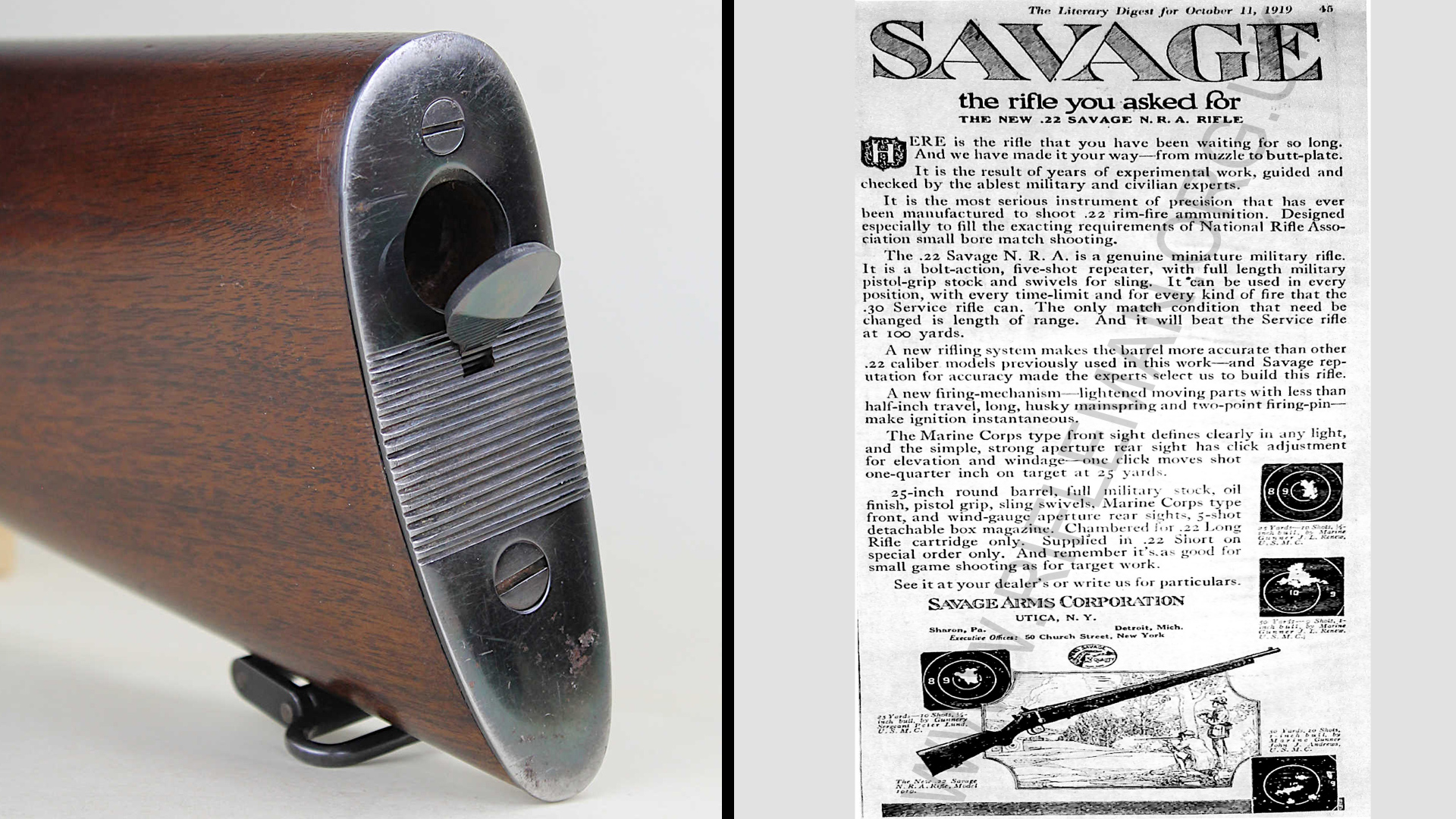 Left: A military feature, this Model 19 NRA has a “trap” in the stock. Right: Savage claimed the Model 19 NRA could outrun the M1903 Springfield at 100 yards.

But “desirable” is in the eyes of the beholder, and this Model 19 NRA is still history in the hands. Consider that this rifle may still be “factory correct” as many gun manufacturers did not consistently produce accurate records (or catalogs, for that matter), and when the War Department canceled contracts towards the end of World War II, companies found themselves with orphan weapons. and gun parts. The financial solution was to sell the weapons on the civilian market, often with substitution of parts to deplete stocks or complete production. This makes the provenance of a firearm often murky, and such can be the case with this Model 19 NRA. Either way, the “NRA’s” moniker and overall condition, the rifle’s reputation for accuracy, relative rarity, bright bore, original twin magazines, and affordability make it attractive.

The barrel and receiver of the Model 19 NRA are unusual, machined from a single piece of steel. Another anomaly, the barrel of this specimen measures 22 inches long, whereas the references say that it should measure 25 inches; contour is a sporty heavyweight. The length of the pull is 13½ inches, the overall length is 40½ inches, and the weight is 6¾ pounds. 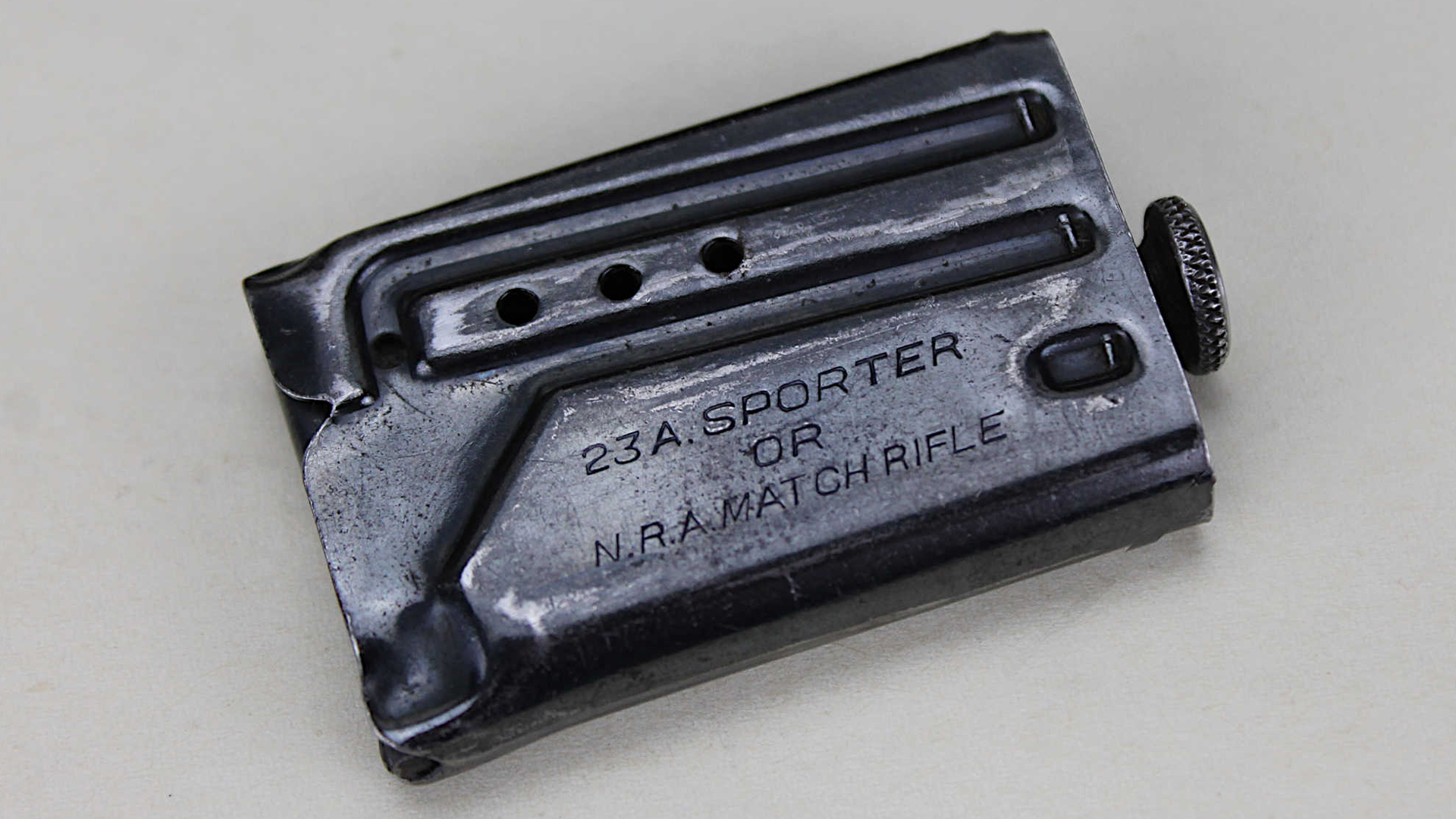 The magazine lettering is a clue that the Model 19 NRA and the Model 23-A are essentially the same rifle.

The ejection port is a large oval, making it easy to single-load cartridges when needed – and what competitor hasn’t asked Mr. Murphy to force an unexpected single-load? Twin extractors pinned in place also discourage Mr. Murphy from embarking on this particular operation. A cutout in the left wall of the receiver accommodates the left extractor and is possibly intended to indicate the direction to follow for the gases in the event of rupture of the case. About half of the cocking is accomplished when the bolt is raised and the rest when the bolt is closed. Typical for .22 LR bolt action rifles, the root of the bolt handle presses against the receiver to serve as the sole locking lug. The safety blocks both trigger and bolt movement, and the trigger break is 1 ½ pounds.

Savage’s proprietary micrometer front sight has been replaced with a Redfield aperture sight in a Model 19 NRA/Model 23-A specific mount, hinting at a factory substitution. The handlebar was missing and its dovetail a little screwed up; careful work with a ball peen hammer, files and cold bluing restored it so I could then install a Lyman 17A globe handlebar. After disassembly, a careful safety inspection, and running dummy cartridges through the action, the former Model 19 NRA rifle was ready for use.

With gusty wind at six o’clock perhaps explaining some vertical stringing, the Savage still managed tight bunches at 25 yards with multiple brands of match-grade .22 LR ammunition, showing a preference for SK High loads. Velocity Match and Aguila Rifle Match Competition. The wind quickly picked up and shifted until nine o’clock, abbreviating the accuracy assessment to 50 yards with iron sights. Even such limited testing showed that the rifle deserved its “Match Rifle” title. 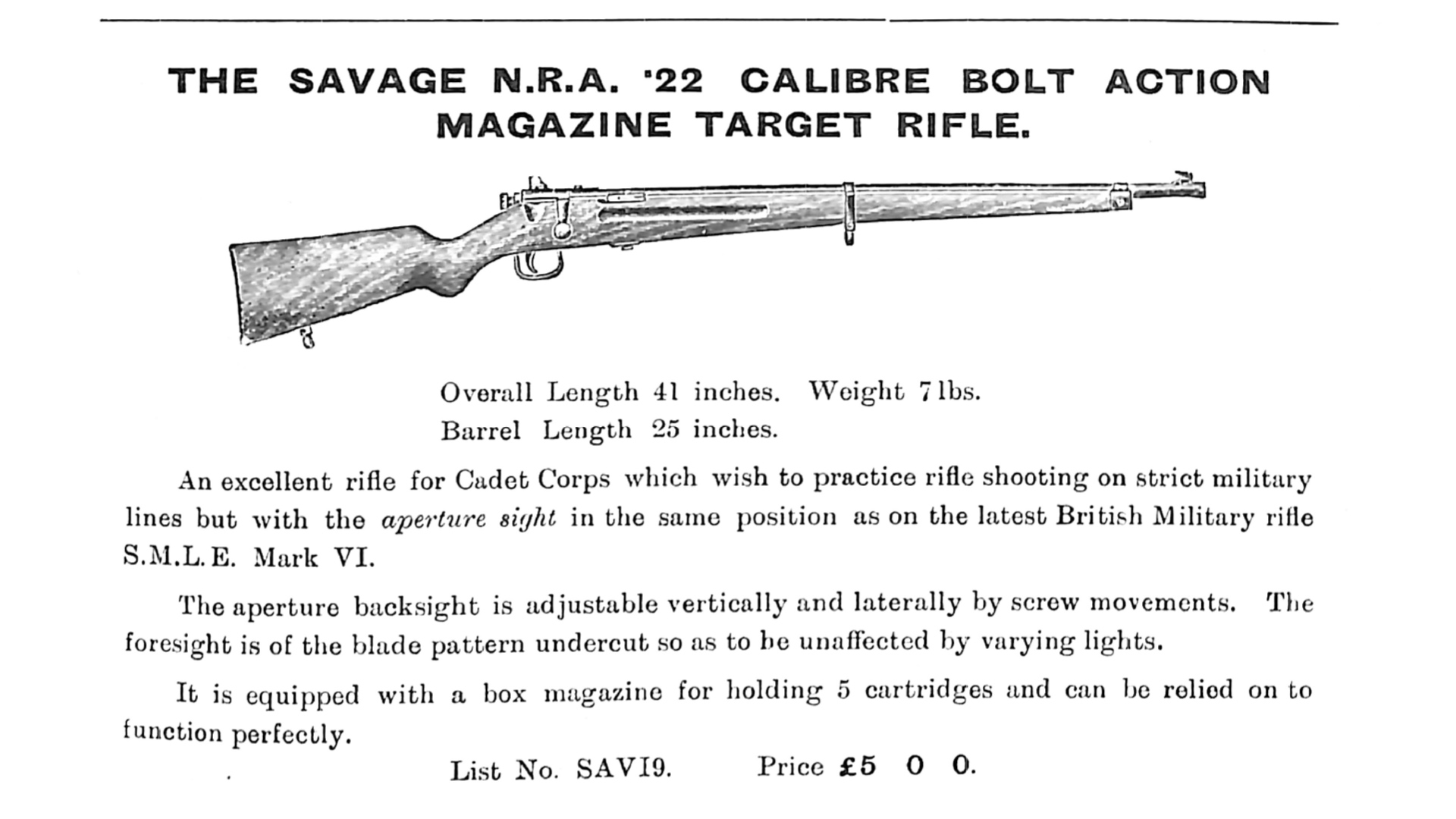 Although probably not quite “correct”, this Savage “Model 19 NRA Match Rifle” retains historical value, particularly in the “NRA” stamp on the barrel testifying to the NRA’s rich history in American competitive shooting range. It’s both an endorsement and recognition of the NRA’s influence in sports, etched in steel nearly a hundred years ago and still relevant today.