For many of us, shooting a game of clay means heading to the local course. But what if there was a safe way to shoot sporting clays with a single pitcher on just a few acres of land? Enter Renair Shotgun Sports and the ClayBot series of moving target carriers. By providing a platform to couple a trap to a chassis equipped with a power source and remote control, Renair has made designing your own custom sports course a reality.

The Renair ClayBot UTC’s aggressive tires, gasoline engine, and hybrid power system make it a solid choice for extended use, even in rough terrain.

One of the coolest gadgets I’ve seen this year was the Renair Shotgun Sport ClayBot Universal Target Holder at the National Sporting Clays Association US Open held in May at the Back Woods Quail Club in Georgetown, South Carolina. Sporting a bright orange color scheme and relatively large tires, this machine was hard to miss while walking. It’s basically a remote-controlled adjustable base for mounting a trap, but the ClayBot UTC is so much more than that.

The heart of the ClayBot Universal Target Carrier is a 25 horsepower gasoline engine, which powers a hydraulic system for driving and tilting the trap. A hybrid system, the engine also powers the electronics with an on-board alternator that charges the Universal Target Carrier’s battery while it is running. Custom electronics supplied by a California company are the “brains” inside the UTC, and the battery powers it, along with the target release, trap rotation, and spring tension mechanisms. 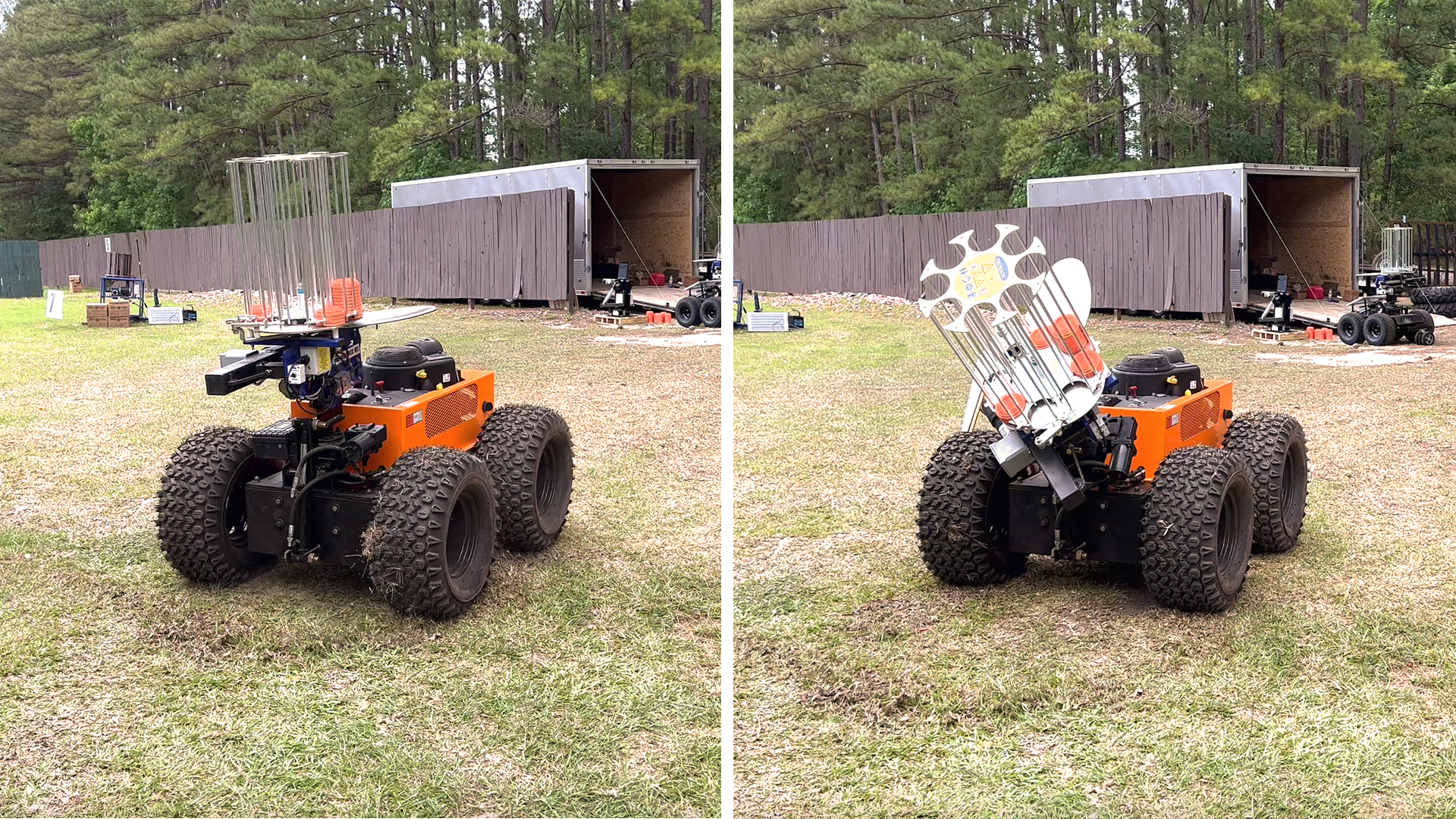 The ClayBot UTC bracket can rotate the trap 360 degrees, and the tilt of the trap is powered by the hydraulic system.

The movement of the trap is adjustable using an RC type remote control, which also manages the control of the drive system. The range of the remote control is about two miles. A capable machine, the Renair ClayBot Universal Target Carrier’s gasoline engine also offers variable speed and increased torque.

What really sets the Renair ClayBot Universal Target Holder apart is that almost any tool you can think of can be plugged into it, thanks to the powerful hybrid system that provides electric and hydraulic power. “There are many other uses for the ClayBot UTC besides a moving trap,” says Ben Rennert, son of company founder Casey Rennert. “For example, you can pull a rough mower, split wood or even spot a trailer with it.” 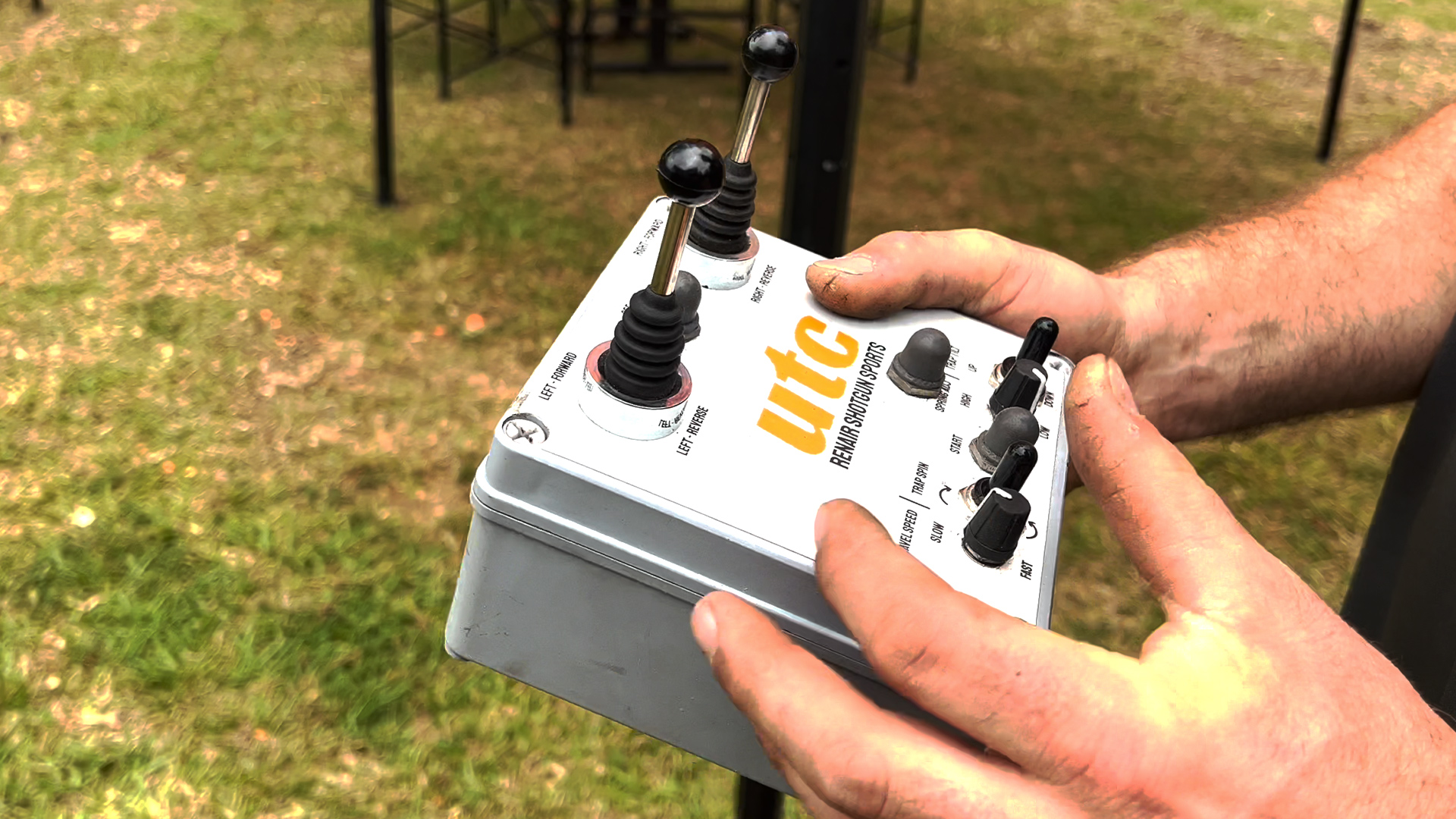 The variable drive speed control on the remote control allows easy and quick switching of the ClayBot UTC from a slow crawl to a fast pace.

While the Renair ClayBot Universal Target Carrier I observed at the 2022 National Sporting Clays Association US Open in South Carolina was fitted with a Promatic trap, just about any trap will do. Ben told me that the three most popular trap brands are Promatic, Laporte and Atlas.

With a Renair Shotgun Sports ClayBot Universal Target Holder and a few acres of land, you can create a custom sports course. All you have to do is use your imagination. Small adjustments to the tilt, rotation or angle of the trap, or moving the ClayBot UTC itself, can all be made easily with just the press of a button or two on the remote. You can even lower the trap or adjust the spring tension to change the speed. With the remote’s range of around two miles, if you have a full tank of gas, the possibilities for sporting clay presentations are nearly endless with the ClayBot UTC. 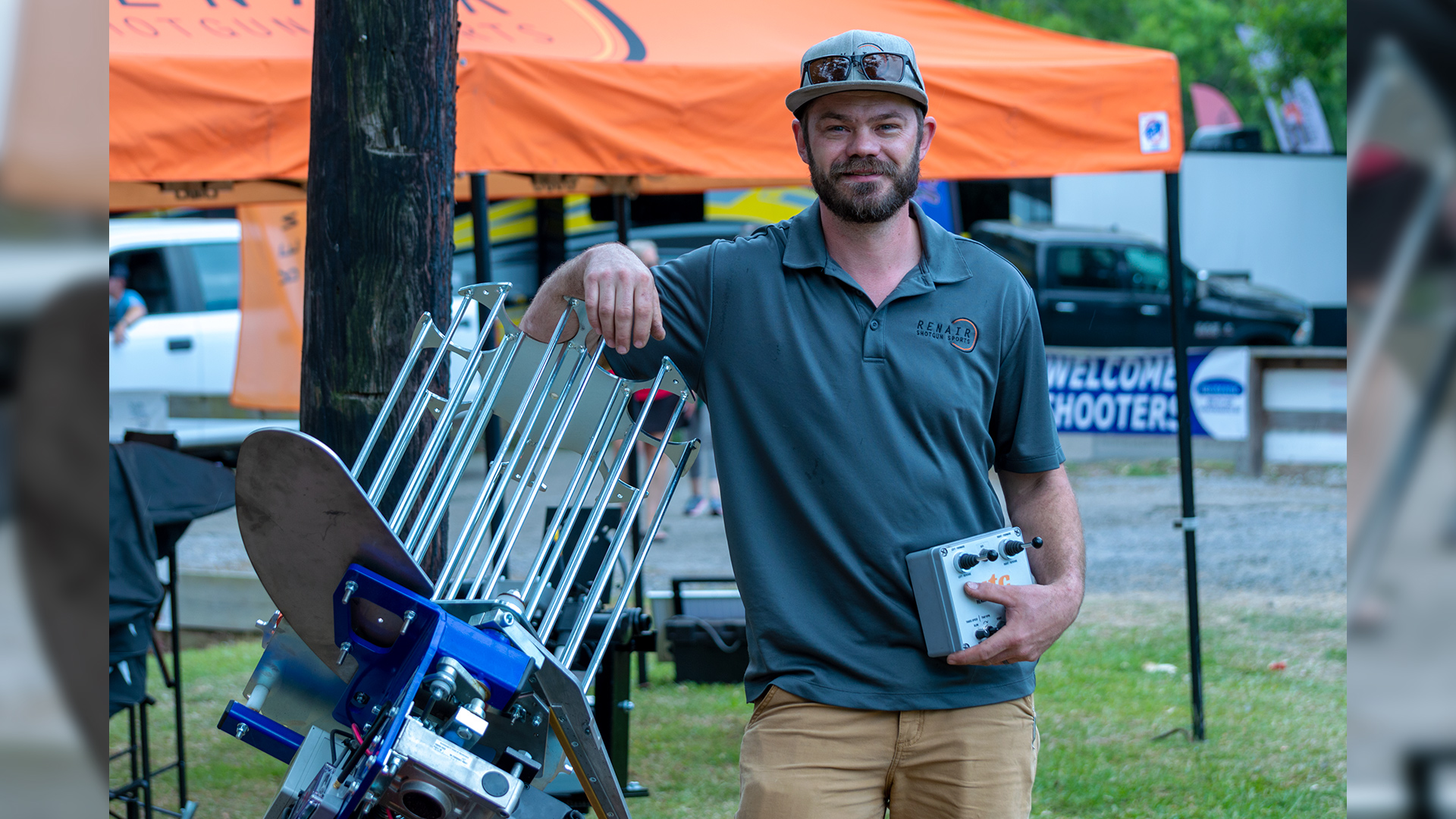 Ben Rennert with the UTC ClayBot at the 2022 National Sporting Clays Association US Open in May at the Back Woods Quail Club in Georgetown, South Carolina.

Since the ClayBot Universal Target Carrier is state-of-the-art, it doesn’t come cheap. Pricing starts at $16,500 with no catch. Renair Shotgun Sports also offers more affordable models in its range of moving target carriers, including the compact ClayBot MKIV ($8,500), which replaces the on-board generator with a 30-watt solar panel, among others. Visit renairshotgunsports.com to learn more.