The operation of a semi-automatic pistol is a finely tuned process. Cartridges must be reliably fed from the magazine, and when fired, the brass is squeezed out of the chamber and ejected out of the gun. Ejecting used cases seems simple and straightforward. As the slide moves rearward from the recoil force, the ejector pushes the brass out of the gun to make room for the next round. Ideally, the brass ejects to the side and away from you.

However, the ejection is sometimes not perfect. The case may strike the inside of the slide and bounce into the ejection port, causing a malfunction. On occasion, the ejected case will tilt upwards and return towards the shooter. Hot brass flying towards your face (or down your shirt) will be followed by strong reflex action that is usually accompanied by harsh language.

My Smith & Wesson M&P45 2.0 compact pistol is an ejection problem child. It throws brass up and back, and it’s not just a casual ride either. Most are thrown at me, but some, especially light loads, were hitting me. Some even head straight for my face.

You would think that the ejector was hitting the brass too low and near the center. This could send them back directly. But that was not the case. In fact, the ejector hit them laterally, but at too low an angle. The brass hit the inside of the bottom edge of the ejection port causing them to bounce upwards. Evidence of this is a brass colored mark on the wall of the ejection port. 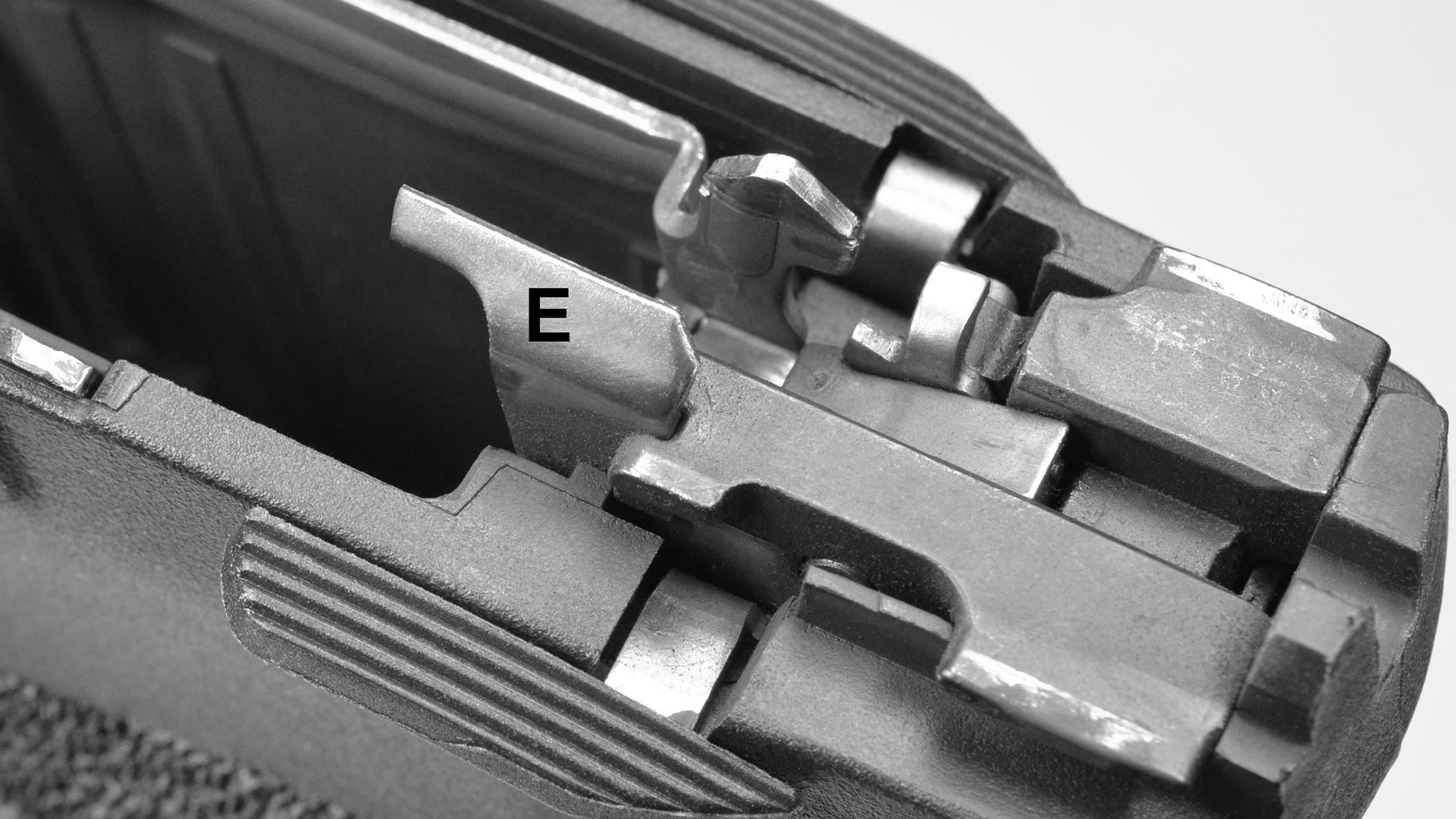 The ejector (E) of the Smith & Wesson M&P45 rises from the frame behind the magazine well.

How do you get the brass to eject at a higher angle to avoid the sliding wall? One way is to have the ejector contact the brass at a lower point. This will cause the brass to be angled higher upwards, and a sideways trajectory at this higher angle means it won’t hit the inside wall of the ejection port. 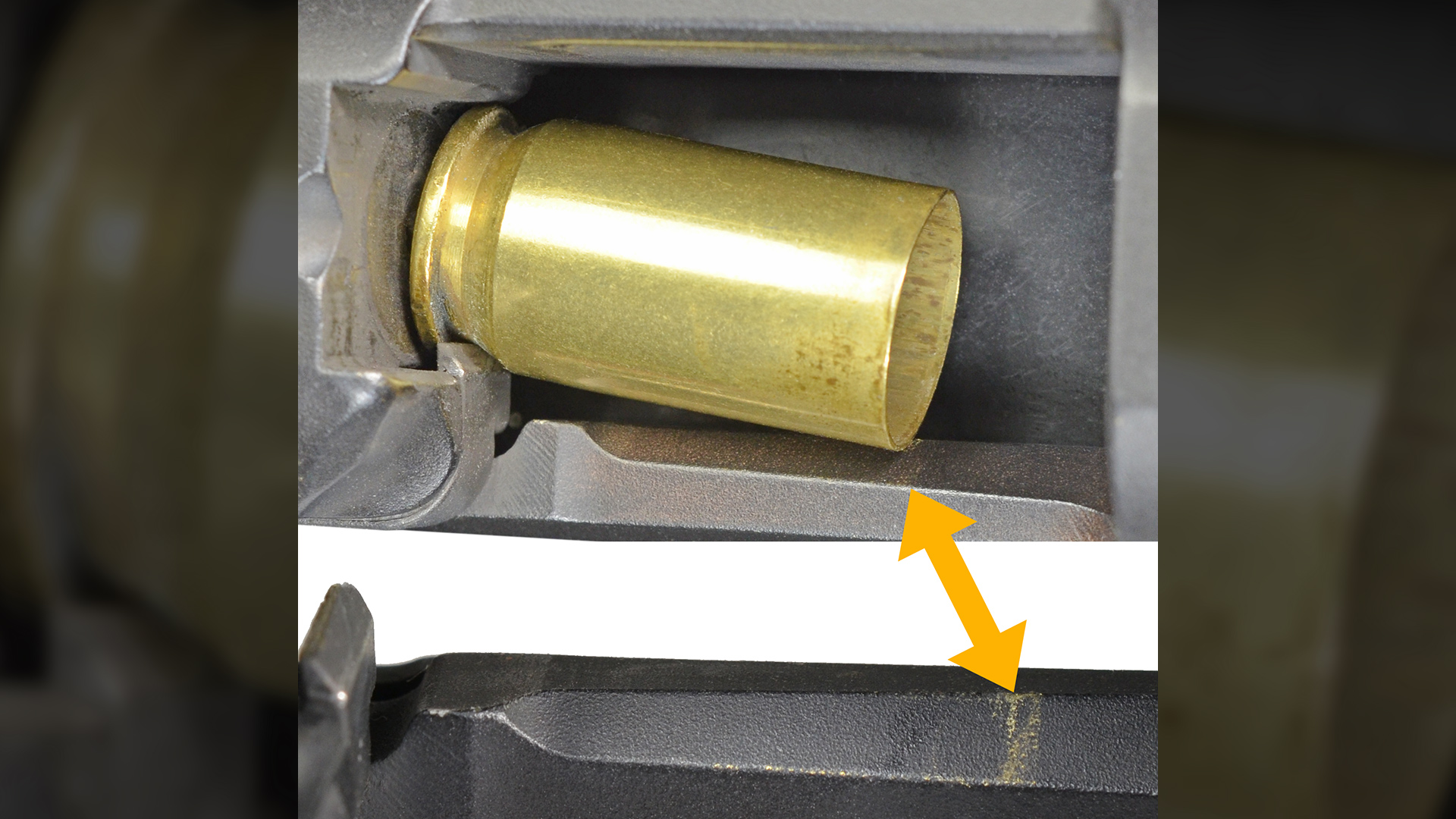 If the ejection angle is too low, the mouth of the case will hit the inside wall of the ejection port, leaving a brass-colored mark (arrow) at the point of contact.

Then I lowered the contact point even further, down to about 75% of the original ejector height. Thirty-nine of the 40 rounds (97.5%) were ejected to the right. It showed improvement, but the goal is 100%. 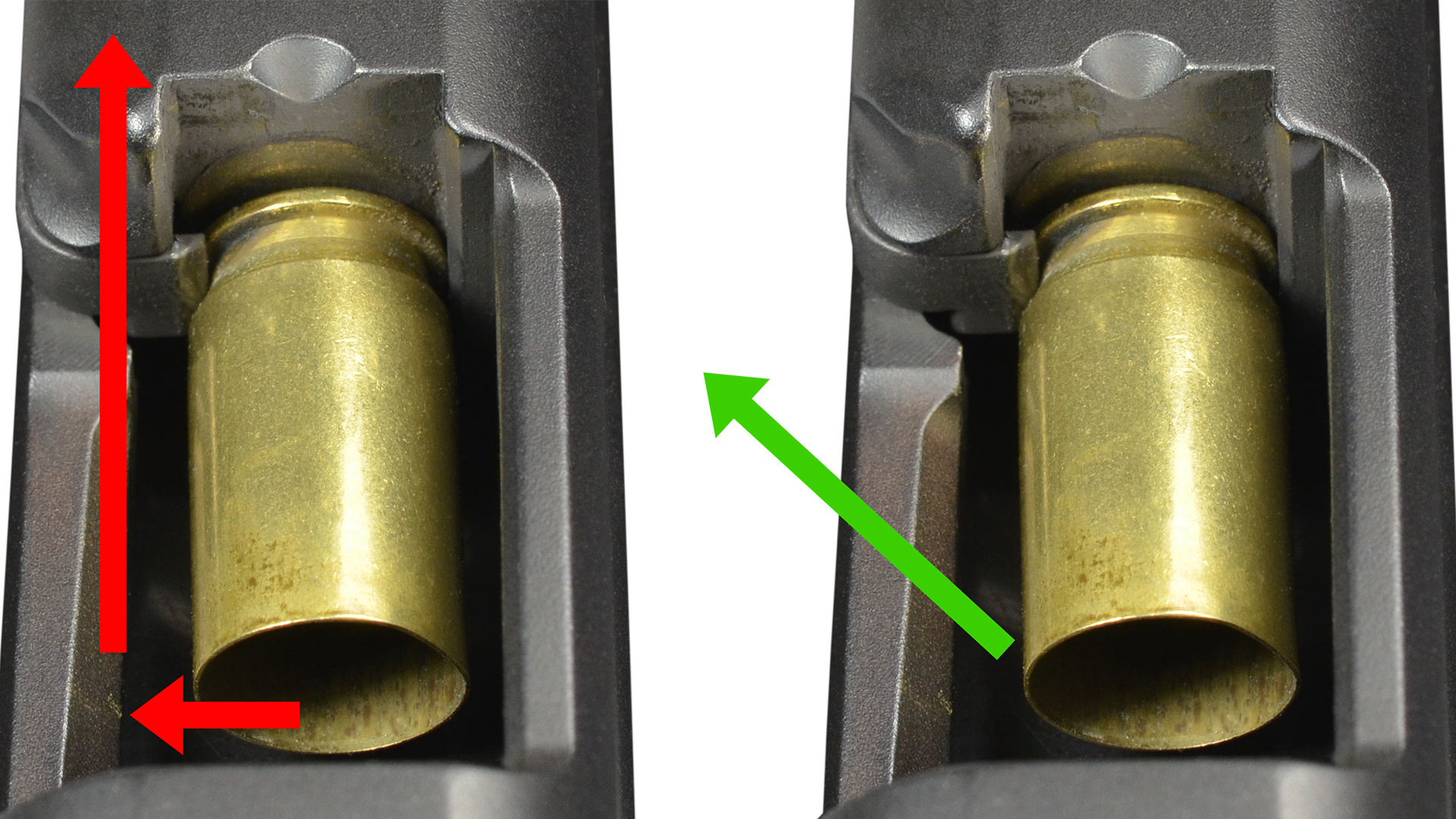 My third cut lowered the contact point to about 90% of its original height, which solved the problem. Straight ejection was 100% out of 180 rounds fired – ejection perfection.

Given how close the 75% cut was to ejection perfection, I probably didn’t need to move the contact point all the way to 90% and could have hit my target at 80-85% . Nevertheless, the ejection is perfect in its current state. 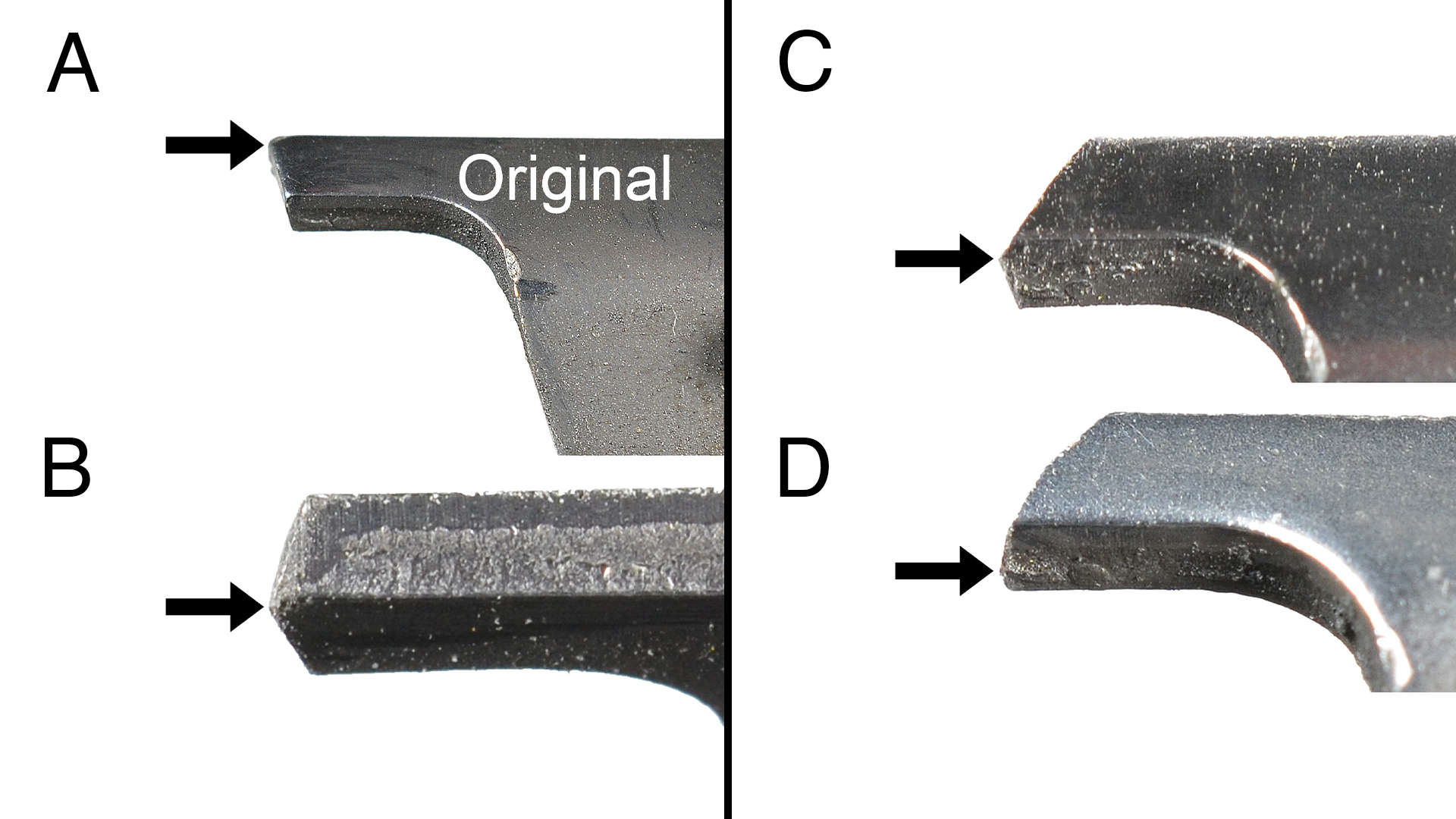 The contact point that touches the brass is the forwardmost point (see arrow). This progression of ejector side views (starting from top left, marked A) shows the original factory configuration, with the contact point nearly up, then about 50-60% up ( B), while the third (C) and fourth images show the contact point moved downwards. The final figure (D) shows where the point of contact resulted in a perfect ejection.

If your gun fires brass, look for the brass-colored mark on the inside wall of your ejection port. If it is there, it is a sign that the brass is deflected from the wall of the ejection port. You may be able to fix it yourself, or perhaps speak with a knowledgeable gunsmith. A little file work can do wonders for changing the angle of ejection.