It was only a matter of time before competitive shooting and fitness collided. A unique blend of endurance, marksmanship and strength, the Tactical Games test “the skills and readiness of tactical athletes from all walks of life”. A typical step in tactical games, or “battle” in sports jargon, involves a fair amount of intense activity with shooting. Consider running with a plate carrier, in addition to carrying something very heavy, while moving to shoot grave targets 50 yards away with a rifle and pistol. After building a strong following in the military and law enforcement communities, as well as civilians, there are now tactical game regionals held in Arizona, Iowa, Mississippi, Texas, West Virginia and in other states, as well as the national championship.

Essentially, tactical games are a mix of intense physical challenges and 2-gun shooting.

To learn more, I spoke to Kirk Holmer, an avid sports fan who served 22 years of active duty in the Utah Army and National Guard. When not training for the Tactical Games, he works for Black Rifle Coffee Company as a Brand Partner Specialist. Involved since July 2020, in 2021 he won the National Tactical Games Championship in the Masters Division. He also holds the Distinguished Rifleman and Distinguished Pistol badges and was on the All-Guard International Combat Marksmanship team. “I discovered tactical games on YouTube at a time when I was participating in different shooting sports and watching videos about them,” Holmer said. “KitBadger had posted a video about tactical games that I found, and although it seemed a bit crazy, it was interesting and caught my attention. I had to check it out. 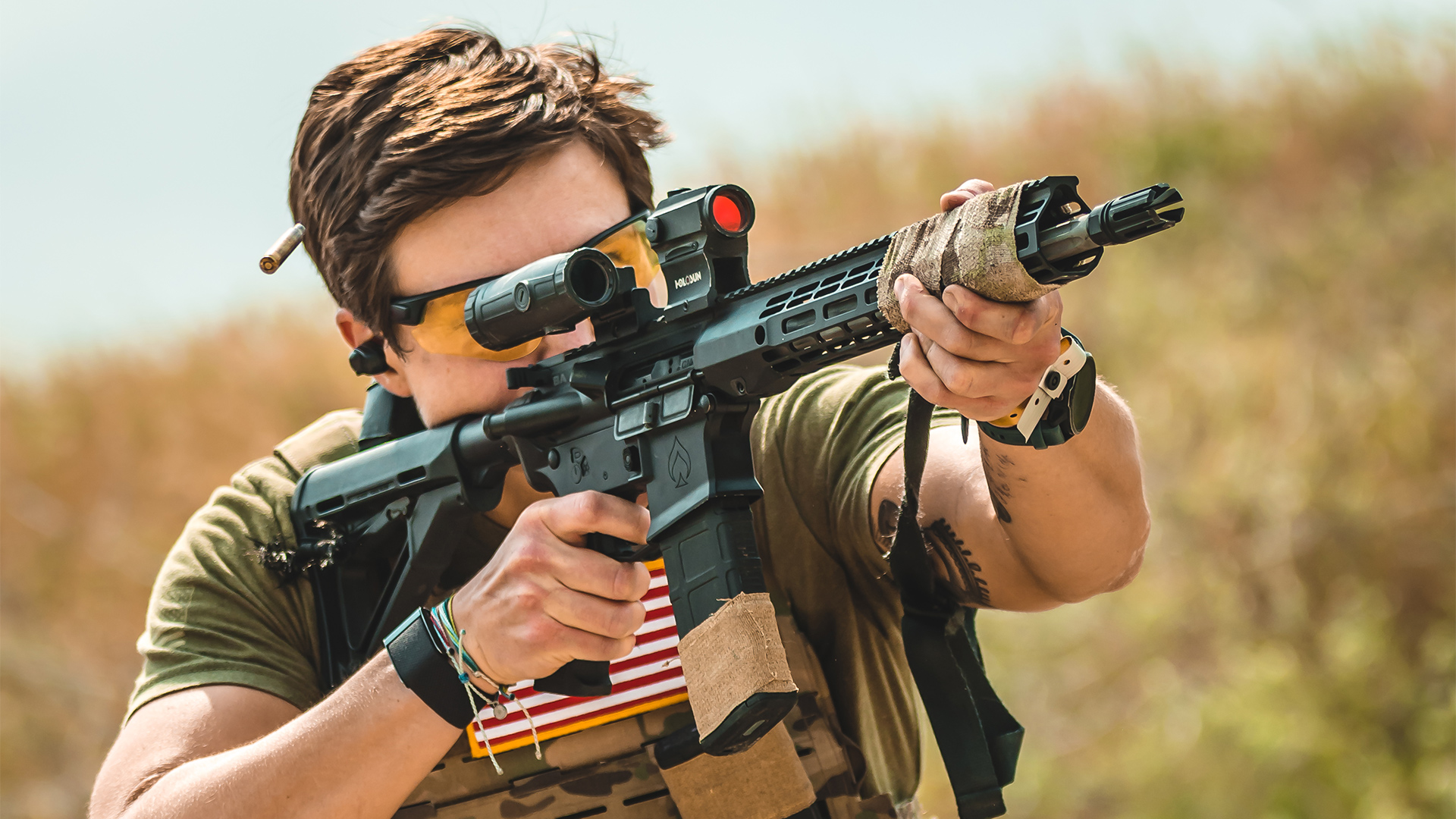 The genesis of tactical games is, like many great companies, friends coming together to make a fun idea a reality. “The sport started in 2019. A bunch of retired and active duty military were talking trash about who was the best at shooting and fitness,” Holmer explained. “They decided to prove it by meeting in a farmer’s field for what the military calls a ‘stress session.’ Seventeen people showed up for this first event. Tim Burke attended this game and admitted they were onto something. He then founded the tactical games. Shortly after their launch, tactical games had taken off. 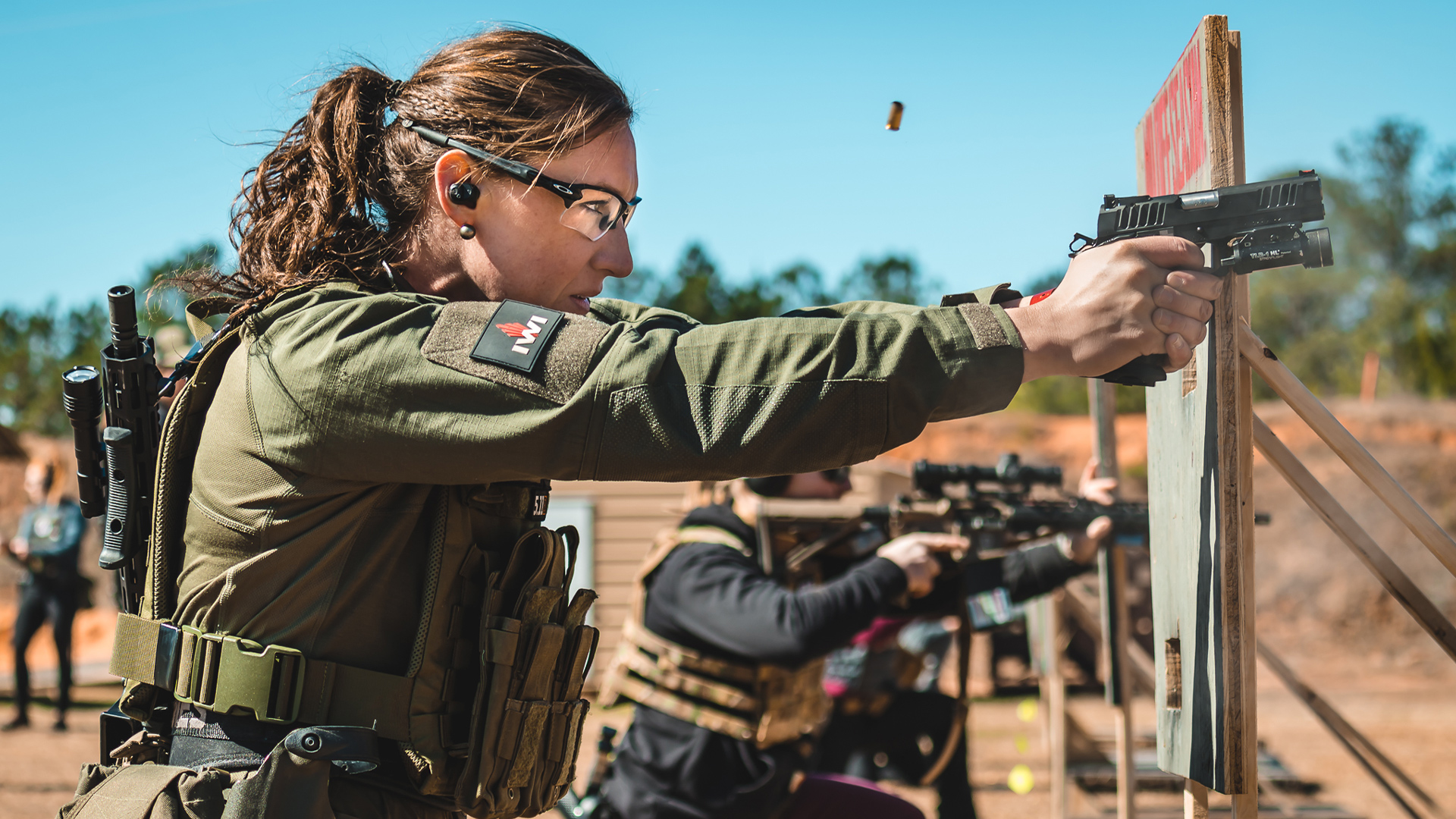 Tactical game competitions offer something for adrenaline junkies and those who love marksmanship.

Endurance battles can sometimes take longer, such as a 12-mile ruck lasting over two hours. Rifle shooting ranges from 5 to 400 yards, with pistol targets primarily at 10 to 20 yards, sometimes reaching 85 yards. Scoring is mostly time plus penalties. “It’s about balancing the fitness and the shooting aspects,” Holmer said. “So there is a 10 second penalty for missed shots. In tactical games, if you stink at shooting, but you’re good at physical fitness, you can’t beat someone who’s good at both. At the 2021 National Championship, one competitor physically dominated with big raw times, but faltered on the shooting portions. The winner that year, Brandon Wyckoff, was good physically and also shot very well. It is this difference that allowed him to reach the podium.

The physical challenges of early Tactical Games events stemmed from military experiences, with tasks such as carrying water canisters, ruck marches, running, etc., as well as some ranged rounds during frequency periods. high heart rate. Other physical demands were then added, such as carrying 150-pound sandbags, climbing ropes, mile-long obstacle courses and steps, which really upped the climb. adrenaline and endorphin. With a 10 second penalty for missed shots, the ability to shoot well under duress is essential. “It’s rare to shoot a clean step in Tactical Games,” Holmer said. 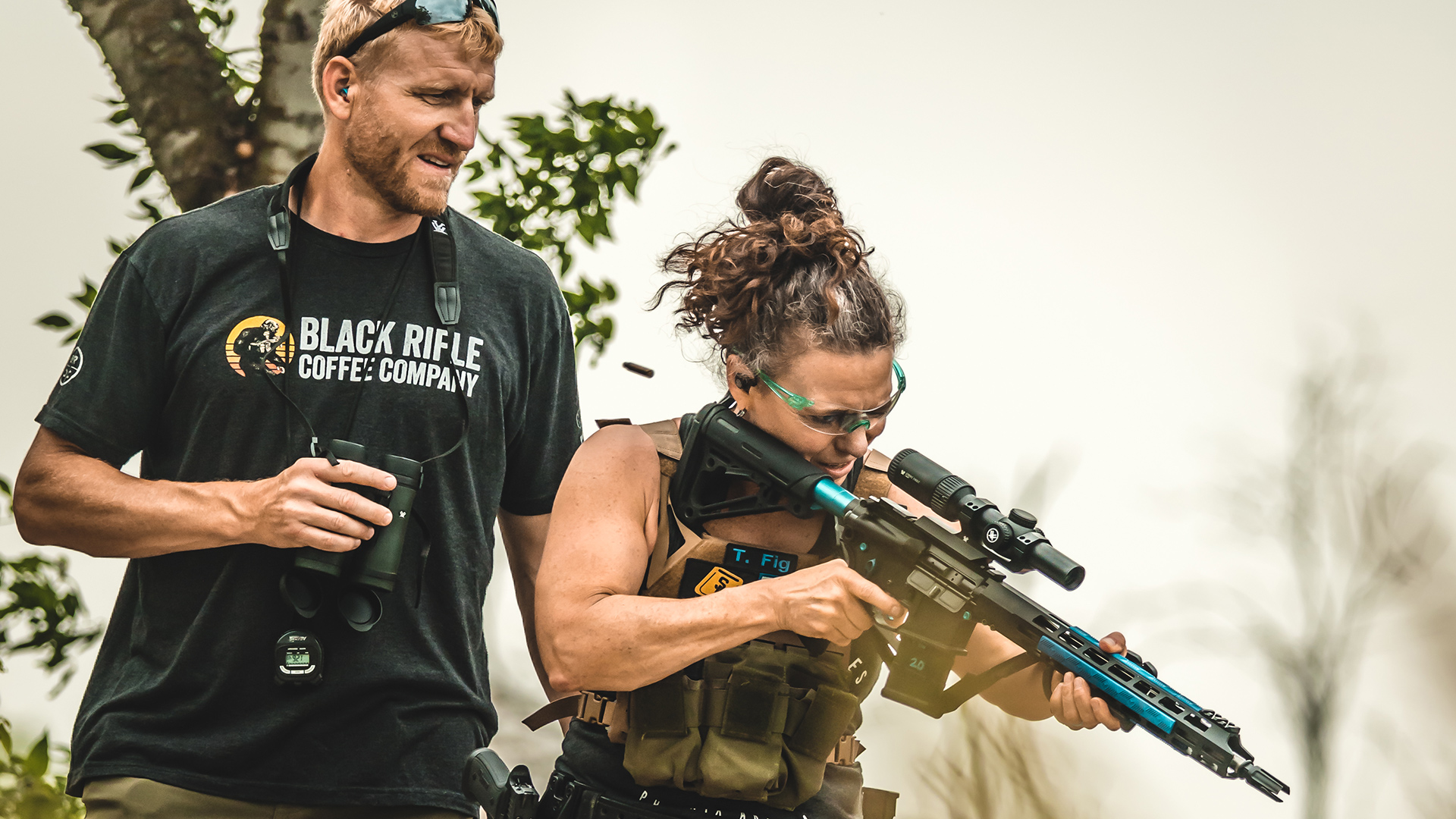 The gun requirements of tactical games diverge from what many competitive shooters are familiar with. For starters, firearms must be carried on your person for the duration of the match, which here means rifles slung over the shoulder and pistols in a holster. AR-15s and their derivatives are popular with competitors in tactical games, with only .223 Rem., 5.56mm NATO, .300 Blackout, or 7.62x39mm loads allowed, with no compensators or muzzle brakes. Initially you only saw red dots on rifles with backup irons, but now scopes are allowed. On the pistol side, there were mostly Glocks, Smiths & Wessons, etc., at first, but as the sport started to gain momentum, the 3 shooters began to notice and guns of competition such as Staccatos began to appear during matches. Acceptable pistol calibers are 9mm, .40 S&W, and .45 ACP.

There are also weight requirements for plate carriers, 15 pounds for men and 12 pounds for women. Another thing to consider – you need to keep all your firearms and gear safe when doing things like rope climbing, carrying heavy sandbags or jugs of water, and maneuvering around obstacles. 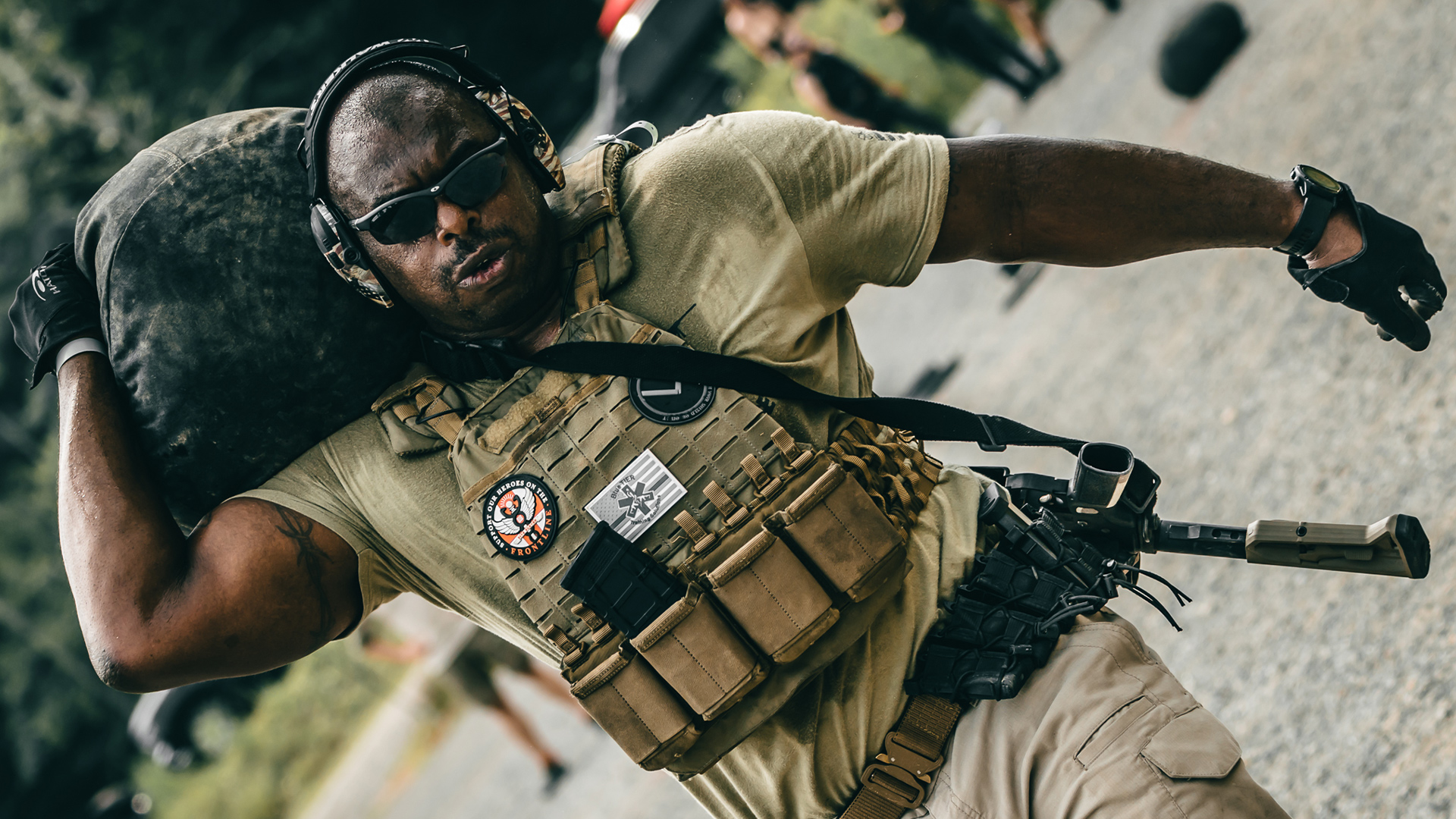 A typical “battle” in tactical games involves carrying heavy objects and overcoming obstacles, pushing the stamina levels of competitors to the limit.

As the sport evolved, divisions were added. Currently, there are nine divisions for men and women. In addition to the Elite, Master, Senior and Tactical divisions, there is the Intermediate level for newcomers to Tactical Games. Shooters over the age of 45 are eligible for the Masters division. Additionally, this year, three sniper challenge divisions debuted to test long-range rifle and pistol marksmanship under pressure.

Multiple divisions allow everyone to enjoy tactical games, from high-level military competitors and law enforcement snipers, to civilian 3-barrel shooters and even newcomers to shooting sports. “Having people from all walks of life attend the Tactical Games competitions creates an incredible camaraderie as everyone gets their ass kicked and has a great time doing it,” Holmer said. “I had significant injuries from my military career with a lot of pain, and the Tactical Games gave me a reason to step up my training and stay fit. As I got better, my pain became more manageable.

For the Middle Division stages, expect to carry items weighing between 45 and 135 pounds for up to 12 minutes for each battle. Mid-division competitors may also opt for burpees if a physical task cannot be completed, but it is advisable to be in good physical condition before tackling tactical games in any division. 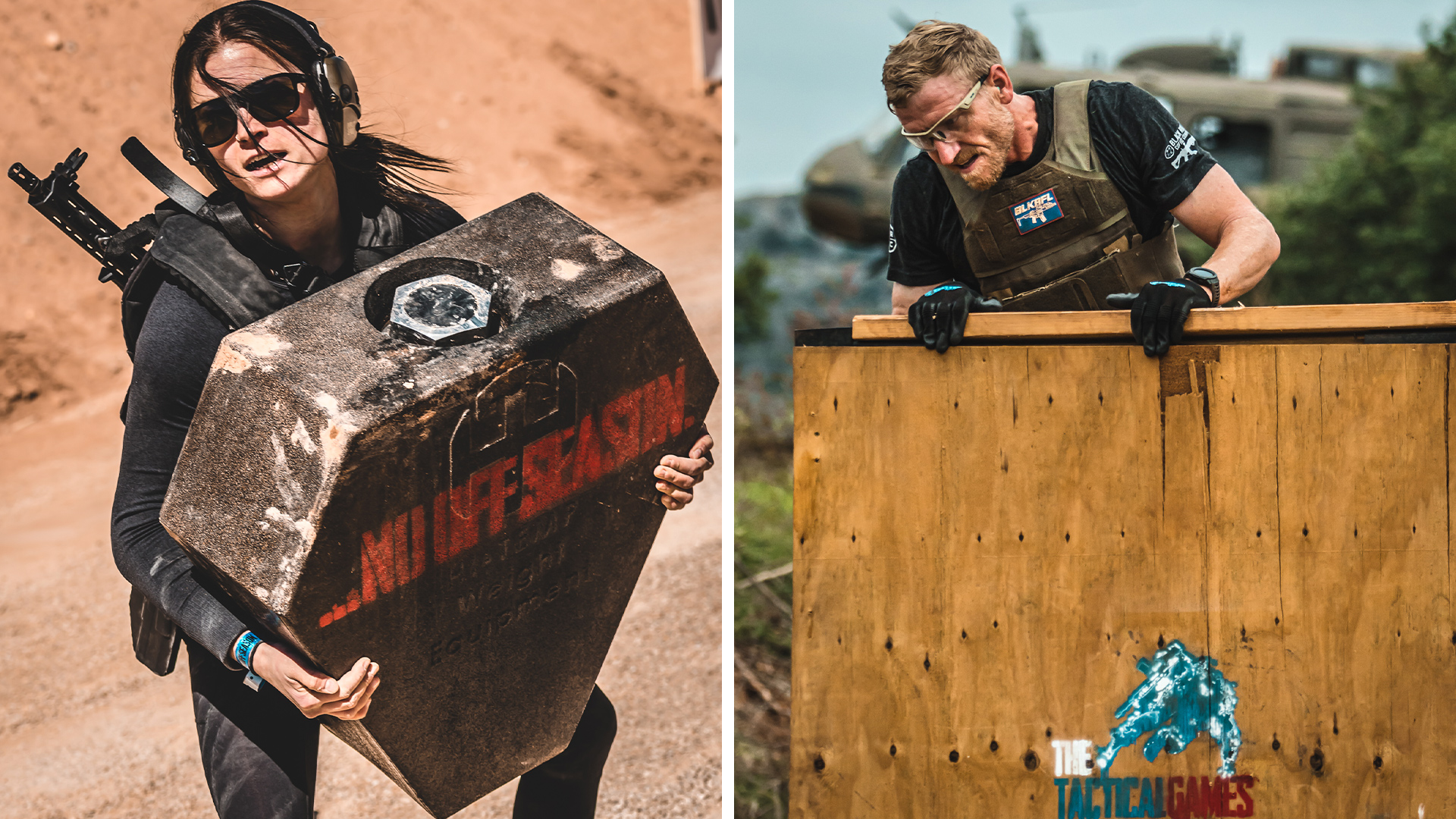 To earn a bid for Nationals, Tactical Games competitors must place in the top five at one of the qualifying events.

The Elite division is for athletes looking for intense physical competition. Here’s an example: The fifth battle for the snipers at the 2021 Tactical Games National Championship had them lifting three successively heavier bags (100, 150, and 200 pounds) five times each on a yoke about four feet above above the ground, then heading down about 50 yards – while carrying a heavy pack – to fire pistols and rifles at grave targets at 10 and 20 yards. After the shot, the competitor returned to the starting point, again carrying a heavy bag, to face a second round of yoke lifting, now with 150, 200 and 250 pound bags, then repeating the race for more rifle and pistol shooting. . Plus, a third round of lifting the yoke to end the 12-minute battle. As past SSUSA Author Candice Horner describes tactical games, “It’s not for the weak.”

Shortly after the start of the Tactical Games, major sponsors began to lend a hand. In addition to Black Rifle Coffee Company as a season sponsor starting in 2021, Magpul, Brownells, Federal, Staccato, Safariland and other household names have sponsored regional and national Tactical Games competitions.

This sport is not for everyone. Many competitive shooters are purely about marksmanship and want to shoot their scenes as quickly as possible and be done with them. Intermediate splits offer interested newcomers a way to try out without the added pressure of strenuous activity. Another resource for beginners is Tactical Games University, which is an introductory class. For its target audience, tactical games represent the gold standard of competition. 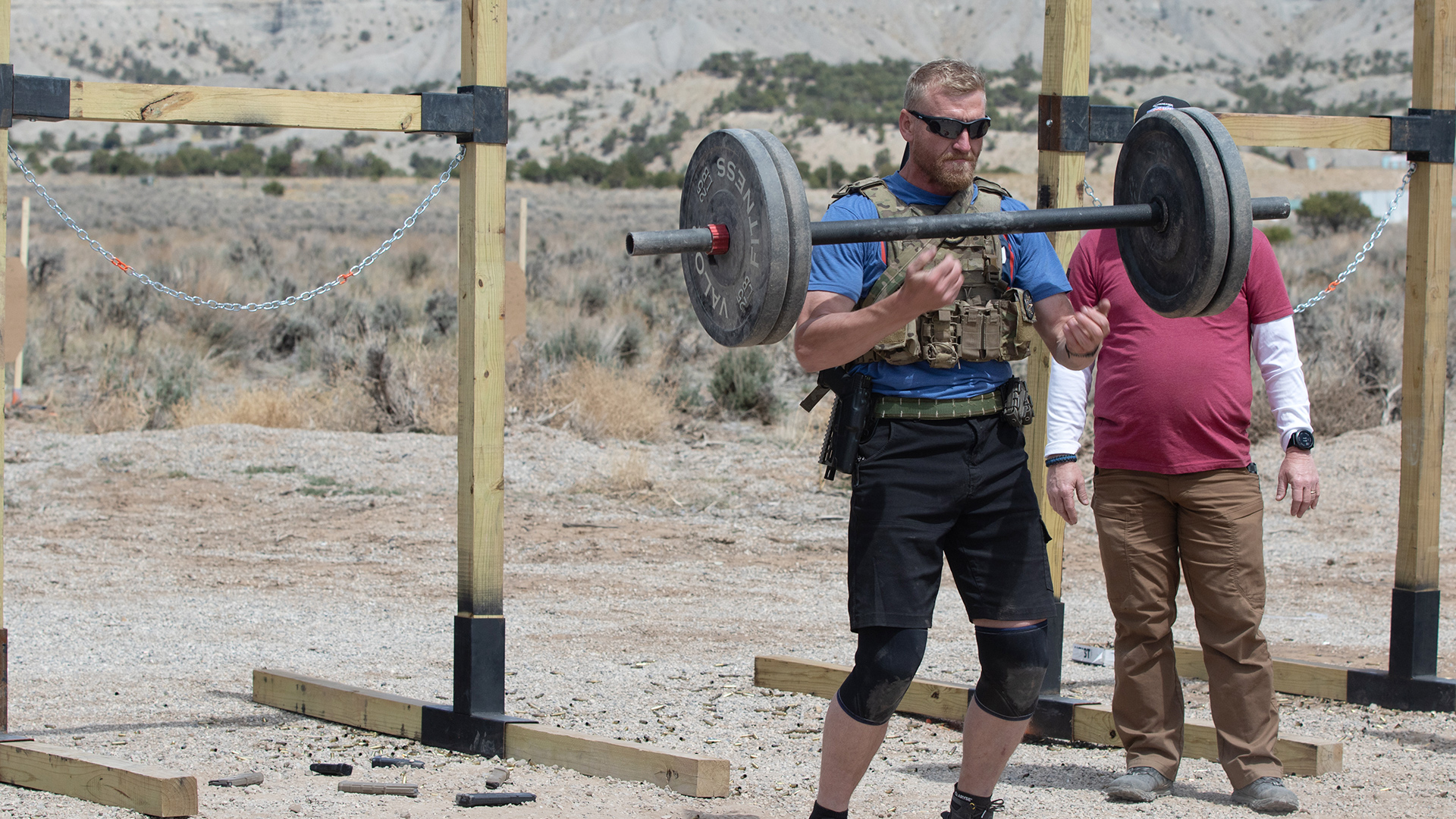 Tes Salb, a former Shooting Sports United States editor-in-chief, won six women’s titles at the Tactical Games. “Understanding your strengths and weaknesses, both in fitness and shooting, helps determine your strategy for every battle,” she said of success in the sport.